The message of Colossians can be difficult even for NC scholars.  One particularly dense, poignant passage begins following the mention of things “not according to Christ” (2:8).  This expression sets up seven “in ____” phrases (e.g., “in Him”) and includes three rather unique words that Paul might even have coined.  Each of these words begins with the same prefix–“syn”–emphasizing the believer’s essential identification with Jesus’ death and resurrection.  We might call these words the three striking “syns”:

Paul focuses in this section on the new life of the believer.  We may perpetuate the connection with the core of the good news today:  He died; we die.  He was buried; we are buried.  He was raised and made alive; we are raised out of the grave and made alive.

Another significant word in the text of the letter to the Colossians is mysterion (mystery), which shows up in 1:27 and 2:2.  The mystery, Paul says, is “Christ in you.”  Significantly, and perhaps paradoxically, in this letter, Paul has God fully dwelling in Christ (1:19, 2:9); Christ living in the believer (1:27), and the believer living in Christ (2:12f, 3:3).

Yesterday, I took Troyte’s Chant No. 1, with the text “By Christ Redeemed, In Christ Restored” and added two stanzas that attempt to highlight a few of these important aspects of the Colossians text.  I share them here in hope that they will benefit the larger Body of Christ. 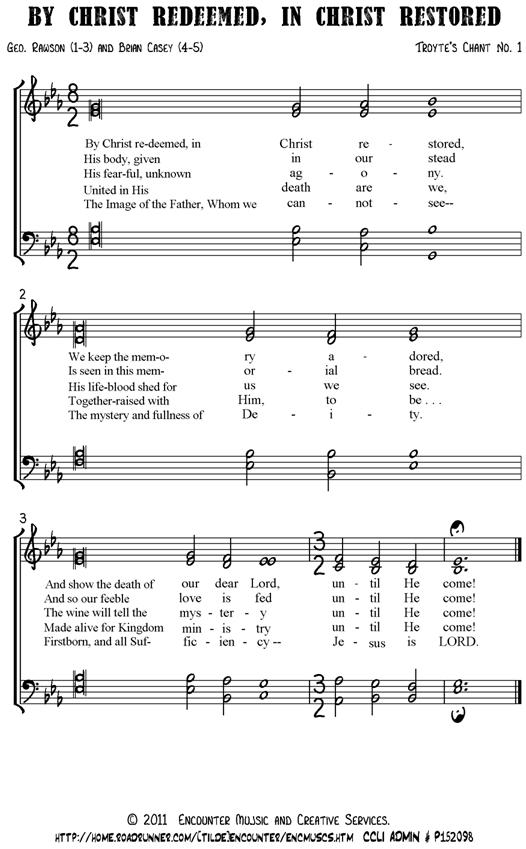 I’ve been thinking a little about Greek the word eikon, from which we get “icon.”  In Paul’s¹ letter to the Colossians, Jesus is said to be the eikon (image) of the Father, and that thought could lead to hours of meditation and worship.

On the other hand, centuries of iconography in the Episcopal/Anglican, Roman, and Orthodox traditions continue to leave me in the middle ground between bored and aghast.  Today I had occasion to scan an article in the Rochester, NY newspaper about religious shrines in private homes, and some Lutheran adherent from Nashville was mentioned as enjoying icons in his home.  Why?  Because, he said, a council in the 7th century said it was OK and related them somehow to the incarnation.  (Oh, man.  I’m not sure I’ll be able to contain myself.  What blog fodder!)

In the meantime, I choose to try to focus on the reality that was found in the Christ.  Tomorrow, Lord Jesus, may my household, and like-minded friends with us, find especially meaningful ways to do just that.

¹ I could call him “Saul” or “Paul” or “Saul-Paul,” but I opt out of calling him “St. Paul.”  Somehow I doubt he would prefer being set on a pedestal in that way.  We’re all saints, he would say.

A far cry from the “Shadow” of serial radio drama fame is the Greek notion of the shadow (skia) that shows up in Colossians 2:17.  2:6-15 is a difficult passage, but whatever the shadow is, it is not the reality that is in Christ. Here are verses 16 and 17, first in the NetBible version, then in Greek:

2:16 Therefore do not let anyone judge you with respect to food or drink, or in the matter of a feast, new moon, or Sabbath days – 2:17 these are only the shadow of the things to come, but the reality is Christ!

The skia appears to be contrasted with the term soma, which is normally translated “body”; here, soma may indicate an expanded or more thorough notion such as “reality” or “substance”–that which is observable.  There remains a possibility that “body” here refers to either a literal or figurative “Body of Christ,” i.e., either the physical flesh of Jesus, or the 2nd incarnation, the church.  So far, I have found that scholarly opinion leans toward a more expanded meaning of soma. Whatever it implies, it is certainly the positive element in the expression, contrasted with a more limited shadow.

The skia (=the shadow, of rules and regulations) does not “know.”  Some of those rules may indeed be well-conceived and well-intended, but the substance of them is apprehended, experienced, known, seen in Christ.

In my relatively pathetic attempts to unearth important messages in the letter to the Colossians, I’ve come upon some etymological gems.  Here are a few:

Viola and Sweet, in their new book Jesus Manifesto, point out that in a few major world religions, the founder is important (see p. 82).  That makes sense.  Think Siddhartha Gautama, Mohammed, Confucius, Joseph Smith, Mary Baker Eddy. I don’t know about Scientology or Swedenborgianism.  In Animism or Atheism, in the sense that those are religions, relationship with the founder seems negligible.

In none of these other religions–and let it be stated that Mormonism is chiefly other than Christianity, along with Hinduism and all the others–is relationship with the founder crucial.  Think about that.

In Colossians, the centrality of Jesus is significant from the outset.  He is lauded and praised and given credit and honor and is generally placed at the core.  Paul’s placing of the Savior at the center seems to be an answer to something in Colossae’s situation.  In other words, whether it was Gnosticism, or some hybrid form of it, or the beginnings of the apathy that later surfaced in the nearby Laodicea, or a plethora of threats to authentic doctrine about the Christ . . . whatever it was, Paul wouldn’t have said the things he said about Jesus if it weren’t called for by the situation he was addressing.  This is an occasional letter–one addressed at a specific time for a specific purpose or set of purposes–not a formal epistle.

It has been noted by scholars that the wording in Colossians of a certain Christ-expression is emphatic, if not unique.  Chapter 2 verse 6 has this:  ton Christon Iesoun ton Kurion (caps added)–which, when literally, awkwardly translated, means the Christ Jesus the Lord.  The reiteration of the article “the” provides the special emphasis:  The Christ Jesus (who is) The Lord.  This word formulation, I suspect at this early stage of studying Colossians, is just one indication of the centrality of Jesus the Christ.  “Christ,” a scholar noted, has by this time in history become part of a formal proper name and not only an adjectival description of Jesus’ identity.

Given Jesus’ centrality, we must of course seriously consider how to begin — and stay in — relationship with Him.

Our study of Philemon is now history.  My written rehashing of some important things that grew out of the study is also now past.  Time to move on!  As our study of Colossians gets seriously underway – we’ve now read the text aloud twice and have discussed some situational factors that may play into the construction of the letter – I wonder what’s ahead.

In the other two study series (Mark and Philemon), we have enjoyed substantial, trusted material to draw on.  Now, with Colossians, we are more “on our own.”  To be frank, it feels a little early to be setting off without the same brand of compass, but we’ll trust that God will use patterns with which we’re now more familiar to guide us hermeneutically.

There are a few things I “know,” based on life experience and prior study.  For instance, because of a relatively longstanding acquaintance with, and attention, to diction and pronunciation in various languages, I feel rather certain that the way Brett Favre’s name is pronounced is a careless corruption of the French.  Mere celebrity and a few years of paparazzi do not a new pronunciation guide make.  And don’t get me started on the pronunciation and misspelling of “sherbet.”

Oh, I know, you can never tell how English words will be pronounced.  There are so many ways to pronounce the letter combination “ough” that we Englishers ought to know how rough it can be as we hiccough through it all.  See (this amusing poem for more fun-poking.)  Pushing aside the inconsistencies of what Howard L. Chace has dubbed the Anguish Languish, and the plenitude of which Richard Lederer has also parlayed into newspaper columns and books such as Anguished English, let me acknowledge this:  the adulteration of clear principles and institutions of Christianity will be infinitely more significant than the oddities, vicissitudes, and errors of English pronunciation and usage.  Yet, just as the likes of Lederer can say a lot of things with relative certainty because of his history in studying English and other languages, because of a longstanding “conversation” with God’s literature, there are some things I can be relatively sure about.  Some things do seem clear.

Knowledge puffs up, Paul famously said in his 2nd letter (1st canonical one—see reference in 1 Cor. 5:9) to the messed-up Corinthians.  It doesn’t matter whether one merely thinks he knows, or actually knows.  Either way, knowledge can get him into trouble. I do know this.  So, as we proceed into Colossians, and as I prepare and lead, I publicly confess awareness of these things:

It is my desire to uncover God’s message conveyed through Paul in this letter, throwing off any prejudices that may hinder the ascertainment of said message, all the while utilizing any insight gained previously, toward a fuller, more apt understanding of this letter in its original historical, spiritual, and literary context.  It is then (and only then) my desire  to apply the message to the current day.

I, Brian Casey, am typing this with my own keyboard on Sunday morning, January 23, 2010.[1] I type this for my own sake, for the sake of those in the group that may read this, and for my small corner of the blogosphere (in no particular order)—that we all may be reminded of the need to be humble as we approach scripture.

Father God, because of the One and Only Son through Whom the cosmos was created, and because of our desire to be wrapped up in the called-out family of believers of which He is Head, help me/us to see what you want us to see in Colossians.  Please work clearly and influentially in this study of an important piece of communication, written as Your Kingdom spread in the 1st century.