This post is a kind of interlude within a mini-series on “judging” topics—topics that have been a little dangerous.  I don’t want to give the wrong emphasis to readers; neither do I want to paint myself into a corner in anyone’s eyes.  Let’s take couple steps back.

Last fall, I wrote a few posts on gleanings from the book of Judges (link opens in a new tab).  That book, within the library we call the “Bible,” continues to draw me in.  Sure, the stories are riveting, but it’s not that, really; it’s the events described.  What happened is revealing:  how God’s people’s navigated those events, and how God dealt with them over a period of decades.  I think the time of the Judges can be wrongly dismissed as a few cool stories—without apprehending the theological significance of what was going on at the time.

My current series on “judging” doesn’t have anything directly to do with the book of Judges, but there’s obviously a verbal connection.

What are “judging” and “judgment” after all?  The English word ‘”judge,” when used as a verb, tends to be pejorative, but the corresponding words in other languages might not have the same import.  For instance, I suspect the ancient Hebrew word would have had different nuances and implications.

As to this current series on “judging”:  I have intended it to deal more in (1) spiritually or logically assessing than (2) legally judging or (3) ultimately condemning.  Secondarily, I mean to challenge the notion that judging is necessarily to be avoided.  In fact, one well-known personality inventory (non-judgmentally!) validates judging as a neutral trait.  The diagram here comes close to representing my own personality, as assessed a couple dozen years 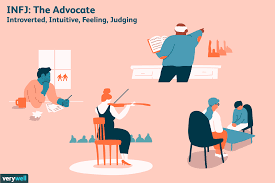 ago.  I’m largely introverted, intuitive, and feeling.  At that time, I came out near the middle of the fourth spectrum that encompasses “judging” and “perceiving,” but my judging tendencies, as defined by Meyers-Briggs, meant that I made many decisions in my outer life based on plans, order, and organization.  I liked to “bring life under control as much as possible.”  These days, I’m more flexible and would probably be stronger in “perceiving,” at least in some respects.  None of this relates too much to what I’ve been saying about judging; it only serves to illustrate that we need to know what we’re talking about when we use a word like “judge.”  Context can help.

On the way to work this morning, I judged that a driver was less competent and courteous than I.  I judged that based on evidence of how that person treated a stop sign.  Yesterday, I judged myself to have enough fortitude to do something that needed to be done.  This was perhaps a spiritual prompting to go out of my way to be kind to someone who had not been kind to me.  That is a judgment I made, as well.  Had I not taken the step I took (which was well received, I’m happy to report), I would have judged myself weak.  I judge myself too harshly at times, and too graciously at other times.  Judging oneself involves many pitfalls, and as a result, we need accountability within small, organic groups of Christians.

Repeated experiences with individuals may lead us to note inconsistencies, or even hypocrisy, in their character.  Less ominously, we may simply assess traits and tendencies and opt out of close association with this or that person.  These are all “judgments” that need not be considered malevolent.  They may not in fact contain any ill will at all.  It may be necessary to judge at times—in order to keep oneself sane or pure.  Judging is not all bad.  We just need to judge rightly … and not direct all the judgment outward!  (See end of previous post.)

The next post, I think, will take a while to construct, and it will conclude the series.  It will briefly evaluate (assess, judge) one view that’s spotlighted in the book Three Views on Israel and the Church (book title).  The format of this book is geared for critique, which is another type of judgment.  My particular critique of one of the views is important to me in several aspects:

I’m not sure which of the above will take the lead in my heart or mind.  I do look forward to being challenged by the views, the scholarly responses, my intellectual process as I read all the above, and the process of communicating all that on this blog.  It may take a bit of time to get it all together, and other posts may come in the meantime, so please stay tuned.

And if you haven’t signed up to received posts by e-mail, please considering doing that.

This site uses Akismet to reduce spam. Learn how your comment data is processed.