These recent musical experiences (all but one of them!) have been excellent.

The Harriman-Jewell Series, now in its 55th season and founded by William Jewell College, is a treasure of the Kansas City Arts scene.  Each year brings various solo artists (and I do mean artists, not just any performers) and ensembles to two venues in the KC area.  Typically included are multiple “Discovery Concerts,” which are sponsored and free to attend.

In one of those, three of us heard a fine young violinist, Randall Goosby, in recital with pianist Jun Cho.  Goosby was not only an accomplished performing artist but also was well-spoken.  He knew what to say, and how much to say, to the audience in order to enhance the experience.  I was introduced to the Debussy Sonata in G Minor—an effervescent, many-colored piece that I will aim to listen to again soon.  William Grant Still’s Suite for Violin and Piano was a delight, too. 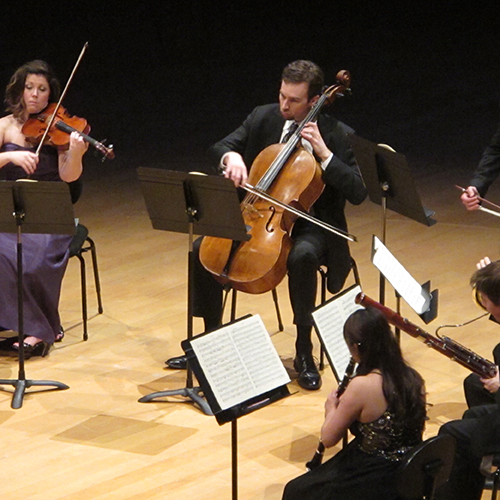 The KC Symphony provides a limited number of free performances each season.  The ones I’ve attended have been sponsored by Lead Bank and have all involved select performers in chamber music (small groups of orchestra members, one on a part; not the entire orchestra).

This program, understated but well-conceived as a tribute to Jewish Holocaust victims, utilized an unaccompanied clarinet in one selection and strings in three others.  The performance, complete in about an hour, featured works by relatively unknown composers Schulhoff, Krása and Haas, plus the often-heard Adagietto from Mahler’s Symphony No. 5.

If I told you I’d rather listen to hip-hop than be subjected to this one more time, would you believe me?  I’d grabbed this record from a freebie pile a few months ago, thinking it would be a nice novelty.  Not so.  I mean, I suppose it’s novel, but it’s certainly not nice.  It’s hard to imagine the intent behind creating this music.  Was it a psychotic or demented mind?  Was it a composer desperate for a place in the world, looking for something that no one else would do (or want to hear)?

I was surprised to find that it was actually a player piano used in the recording, and that the composer had a piano-roll-punching machine specially built for his endeavors.  In listening to this  “music,” one feels as if he is being pecked or poked to death by a non-rhythmic demon.  A description of one of the studies is illustrative:  ” . . . one tempo being related to another by the proportion of two to the square root of two.  Two separate voices moving at this proportion approach coincidence but never exactly meet.”  One succinct definition of “music” is “organized sound”; if one reads the description on the back of the album, this material fits that bill, but it would seem to require a savant mind to perceive much organization in most of it.

Not all music elevates the soul or inspires or “gets you going,”; I do believe there is a place for the avant-garde.  I’m all for variety, generally speaking, but this is horrible music, with so few redeeming qualities that I thought I would smash the vinyl with some satisfaction.  Rather, I’ll probably keep it as a demonstration of what music should not be.

Conductor Michael Stern led this wonderful evening of musical demonstration, which I attended with my son.  Members of the Youth Symphony were on stage with a large number of KC Symphony professionals, and we heard the first two movements of Beethoven’s Symphony No. 7.  The evening was marked by exhilarating music, expressive conducting, and enjoyable communication between Stern, the musicians, and the audience.

My CD Changer
In my player at this moment are five CDs, as usual.  One is my son’s school group repertoire, for his practice.  These songs struck me, on first hearing, as a better collection than last year’s.  He is very attached to their version of the Irish Blessing, which has become the theme song.

In the hopper or recently heard are Swendsen’s symphonies, works by Milhaud, and Adventures in a Perambulator by John Alden Carpenter.  Two days ago, I also gave a listen to some of Hall & Oates’s “oldies.”  A couple of those songs were fun, but it’ll probably be a couple years before I pull that one out again.  As I put near-final touches on this post, I’m listening to Mahler’s Adagietto again, because I was pretty sleepy when I heard it a couple weeks ago with a friend (see item 2 above).  It’s glorious.

Via live video stream, I recently audited portions of the concerts by the Frost School, University of Miami (Rob Carnochan, Conducting) and the Butler School, University of Texas at Austin (Jerry Junkin, Conducting)  These wind bands always offer patently excellent performances of high-quality literature.  The literature does not always run to my taste, but a little stretching here and there is good for me, and I usually wish I could be there live.

University of Nebraska Wind, Carolyn Barber, Facilitating and Conducting
Speaking of being there live:  five hours of driving earlier this month to UNL was worth the effort for this unique experience.  I felt musically and intellectually stimulated.  You can find Carolyn’s articulate notes here.  Her researched thought in the area of flocking behavior as it connects with ensemble ethos is compelling, although I will have to live with it a good deal more before it fully resonates.

Ball State University, Tom Caneva, Conducting
Good video/audio streaming made this livestream concert a particular pleasure.  I heard the late composer Michael Colgrass’s voice introducing his iconic work Winds of Nagual, and the quality was so good that it was hard to believe it wasn’t a live voice on a mic in the audio booth.  The subject matter of that work is more than a trifle unsettling, but the music is evocative and imaginative.

This site uses Akismet to reduce spam. Learn how your comment data is processed.